Development of technical skills focused on youth belonging to the Awajun and Wampis communities located in the Peruvian Amazon. Financial management training and guidance towards the operation of a local business focused on vegetable production, poultry and fish farming. The project sponsors the construction of a bio-orchard for the sowing of tomato, chinese onion, coriander, pickle, radish and beetroot. It promotes communal monitoring of the forest and the use of ancestral knowledge to protect it.

The Awajun and Wampis communities live mainly along the Santiago, Cenepa, Marañón, Nieva, Potro, Apaga and Morona rivers, in the Santa María de la Nieva district, Condorcanqui Province, Department of Amazonas, Peru. The Cordillera del Cóndor region has been significantly impacted by pollution caused by industrial activities. The landscape is characterized by large rock formations, plateaus with vertical walls and a high concentration of vascular plants. In 1996, this area located in proximity to the international boundary between Peru and Ecuador was identified as a “priority zone for the conservation of national biological diversity” by the National Institute of Natural Resources (INRENA). 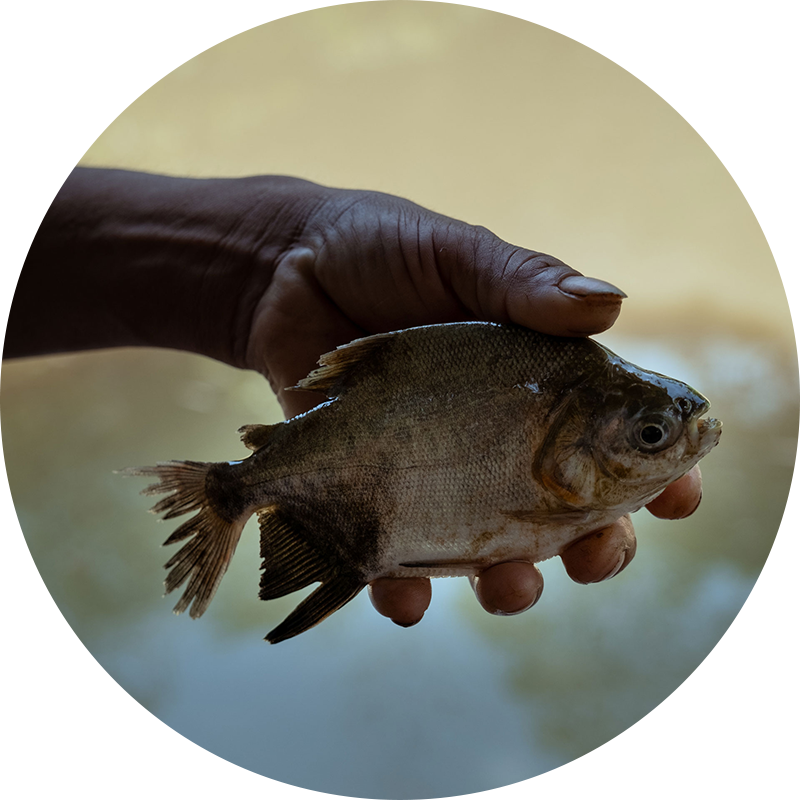 Only 17 nations on earth are officially considered “megadiverse” according to the United Nations Environment Programme, among them Peru, two thirds of which is cloaked in the dense, fertile rainforests of the Amazon. Only Peru’s neighbor Brazil contains more of the forest’s total acreage.

Yet Peru’s spectacular abundance has done little to deter the rapid advance of human activities that have irreparably altered ecosystems, both in the Amazon and around the globe. Indeed, it is that very diversity that has placed these forests in harm’s way. 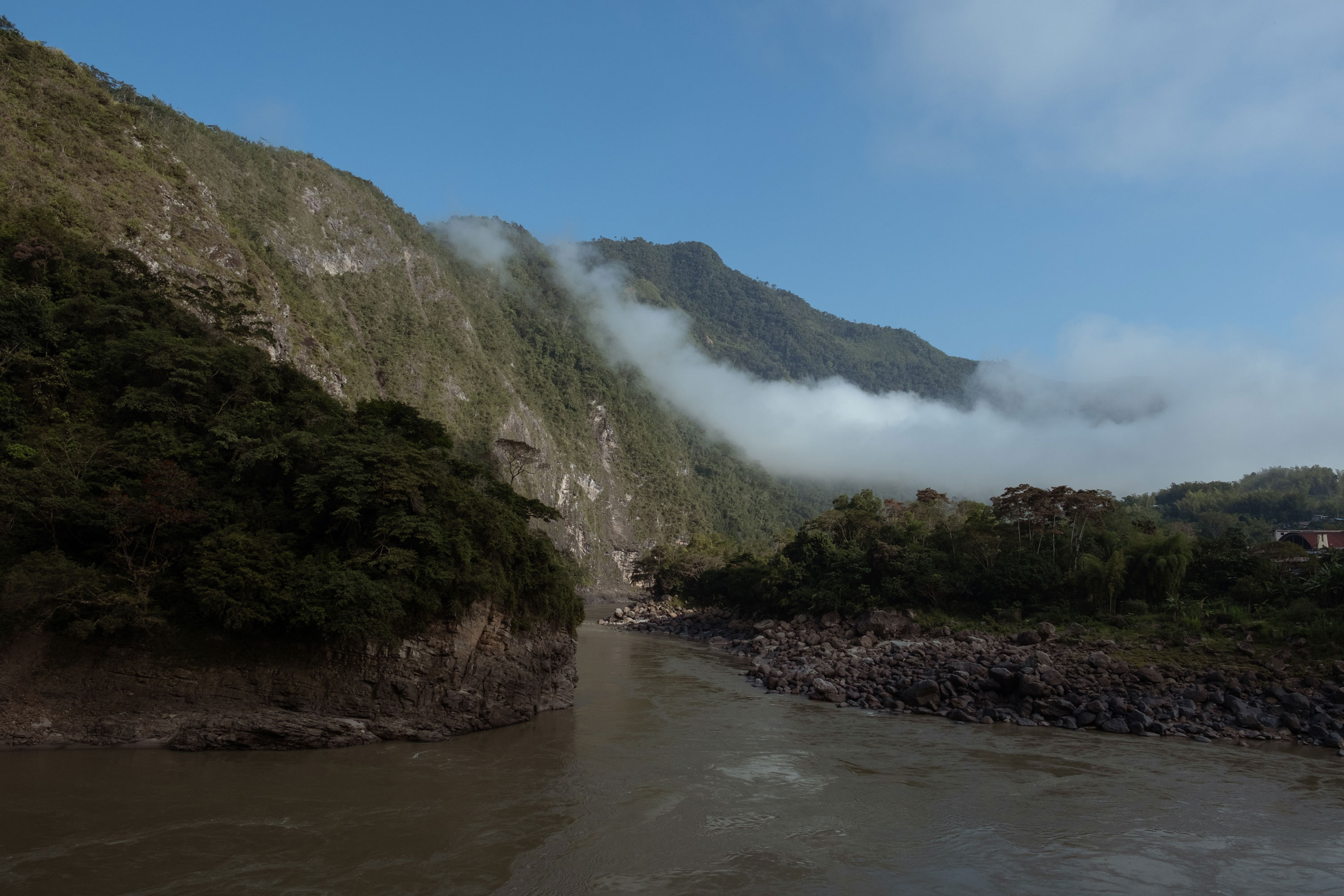 (1) Due to industrial pollution, the Awajun are no longer able to fish in the waters of the upper Marañón River.

Projects considered to be “of national interest”—infrastructure, for instance, and extractive industries like coffee and palm oil—have been degrading the Peruvian Amazon for decades, wiping out native flora and fauna as well as the Indigenous People that have adapted to coexist with them. The knowledge and practices that have defined these communities since long before the arrival of cranes and chemical fertilizers may well prove indispensable in the fight against climate change—if, that is, they manage to survive. 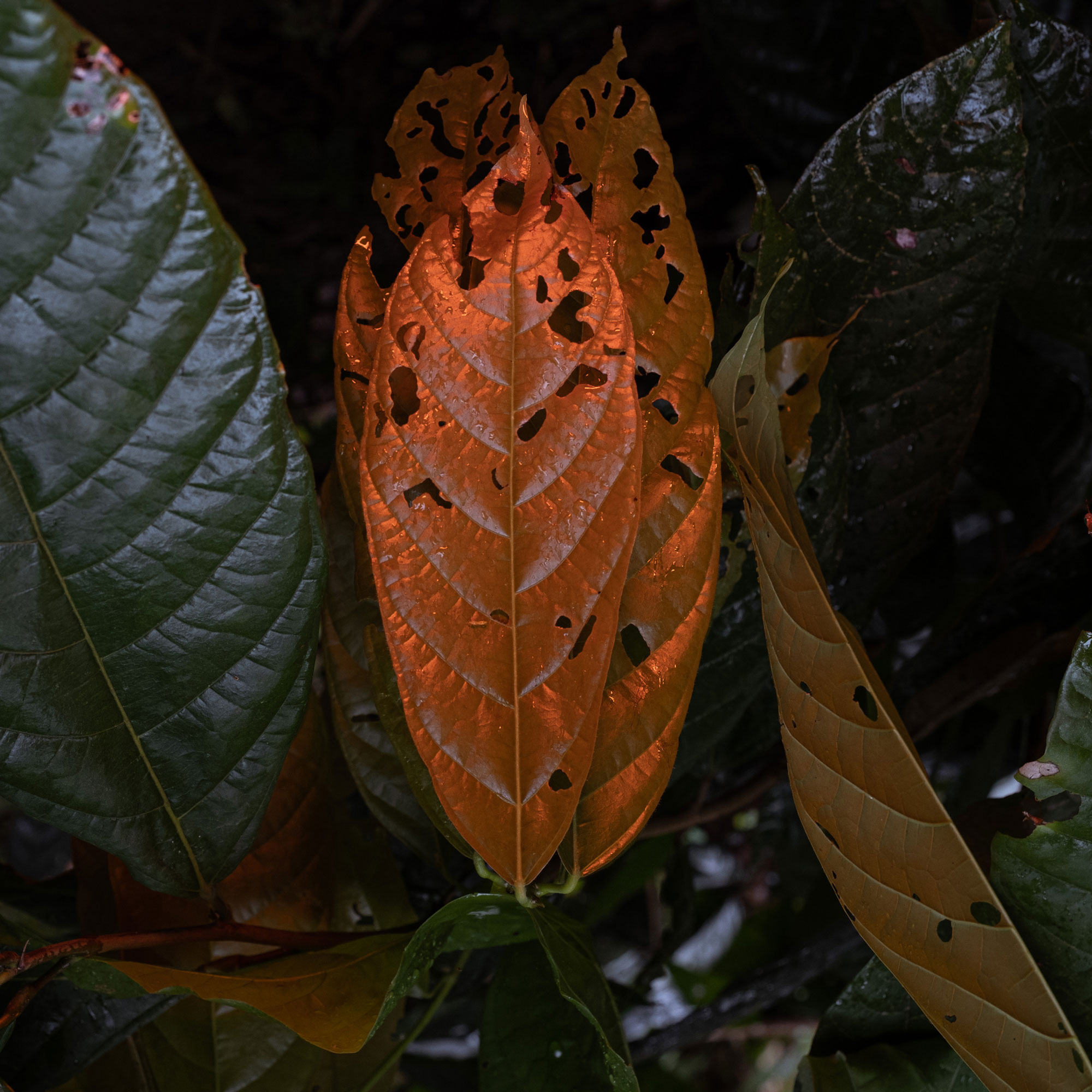 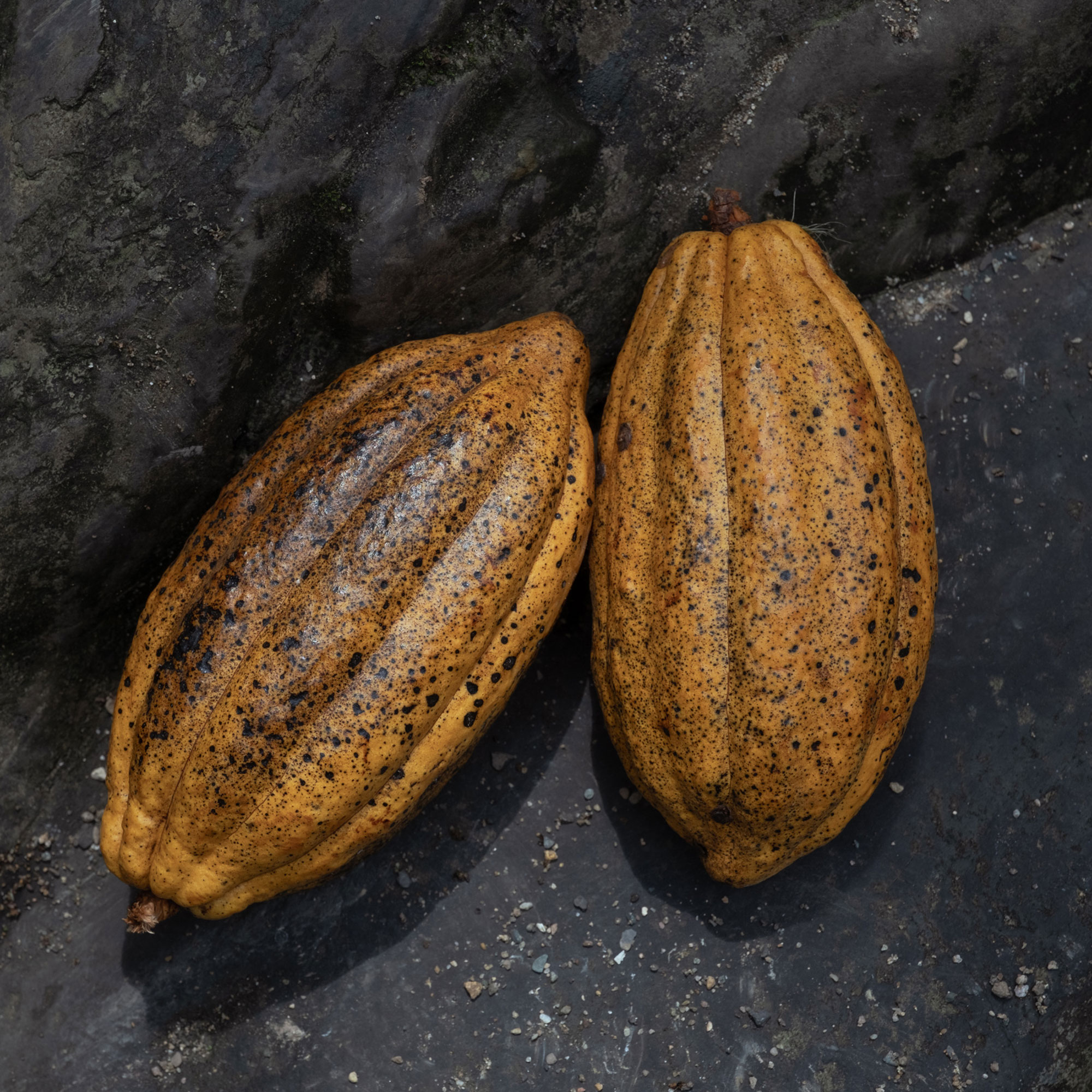 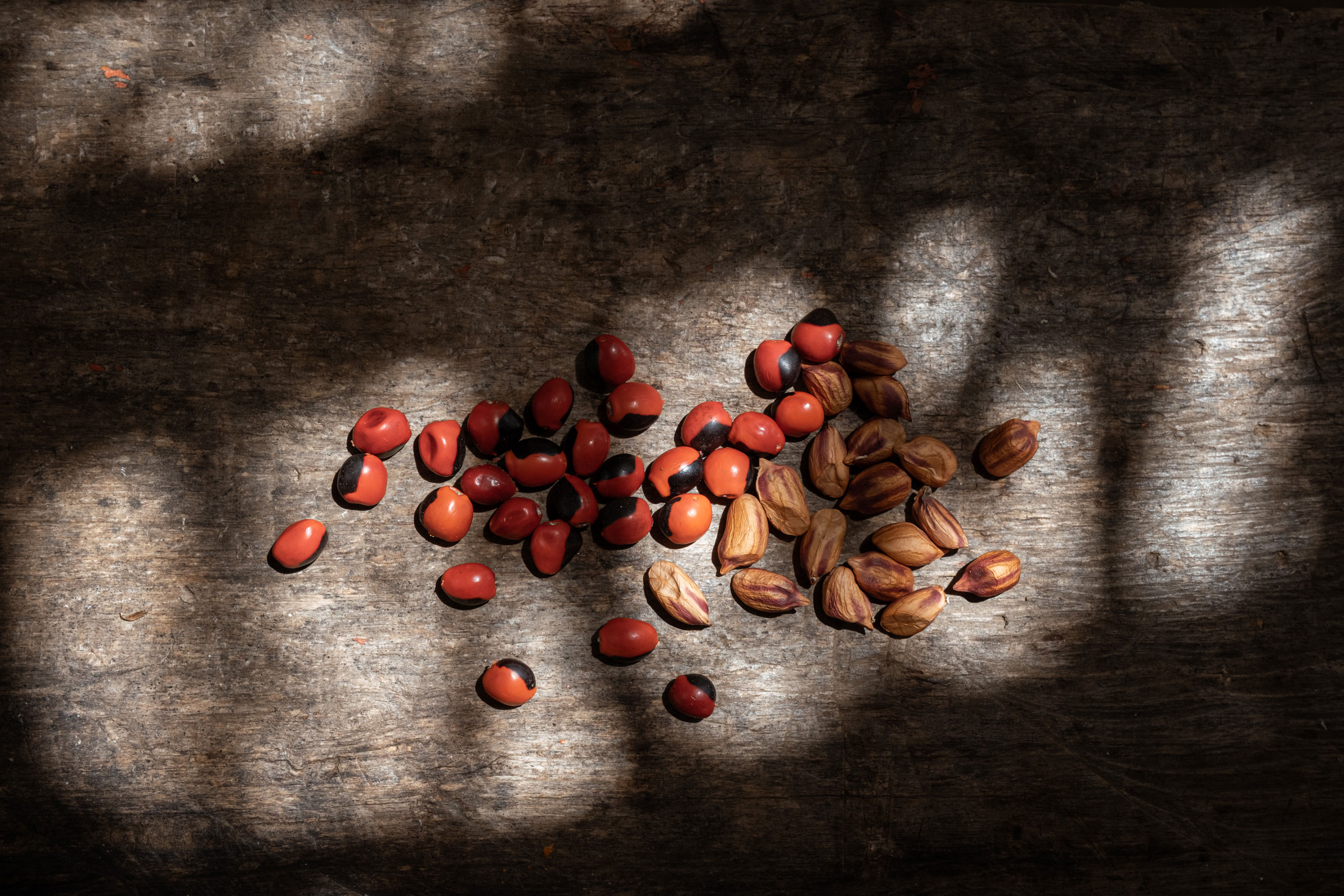 (2) Agat Paati treks into the bamboo forest to collect water from a local stream.   (3) Bakaú (cacao) tree leaf.   (4) Fruits of the Bakaú tree. The Awajun dry the seeds and sell them in the nearest town, El Muyo.   (5) Huayruro seeds (ormosia coccinea) used to make ornaments, and peanuts, which are a part of the daily diet.

“Our ancestors have lived here for eons, but they have never done away with the forest. Now, with modern civilization, it has changed completely,” says Aldo Kasen Awanash, leader of the Awajun community in Tutumberos. “They have bought chainsaws to extract wood; they have eliminated fruits and scared the animals away.”

56,584 people stated that they speak Awajun in the 2017 national census. It is the most widely spoken language among the four that belong to the Jíbaro linguistic family. 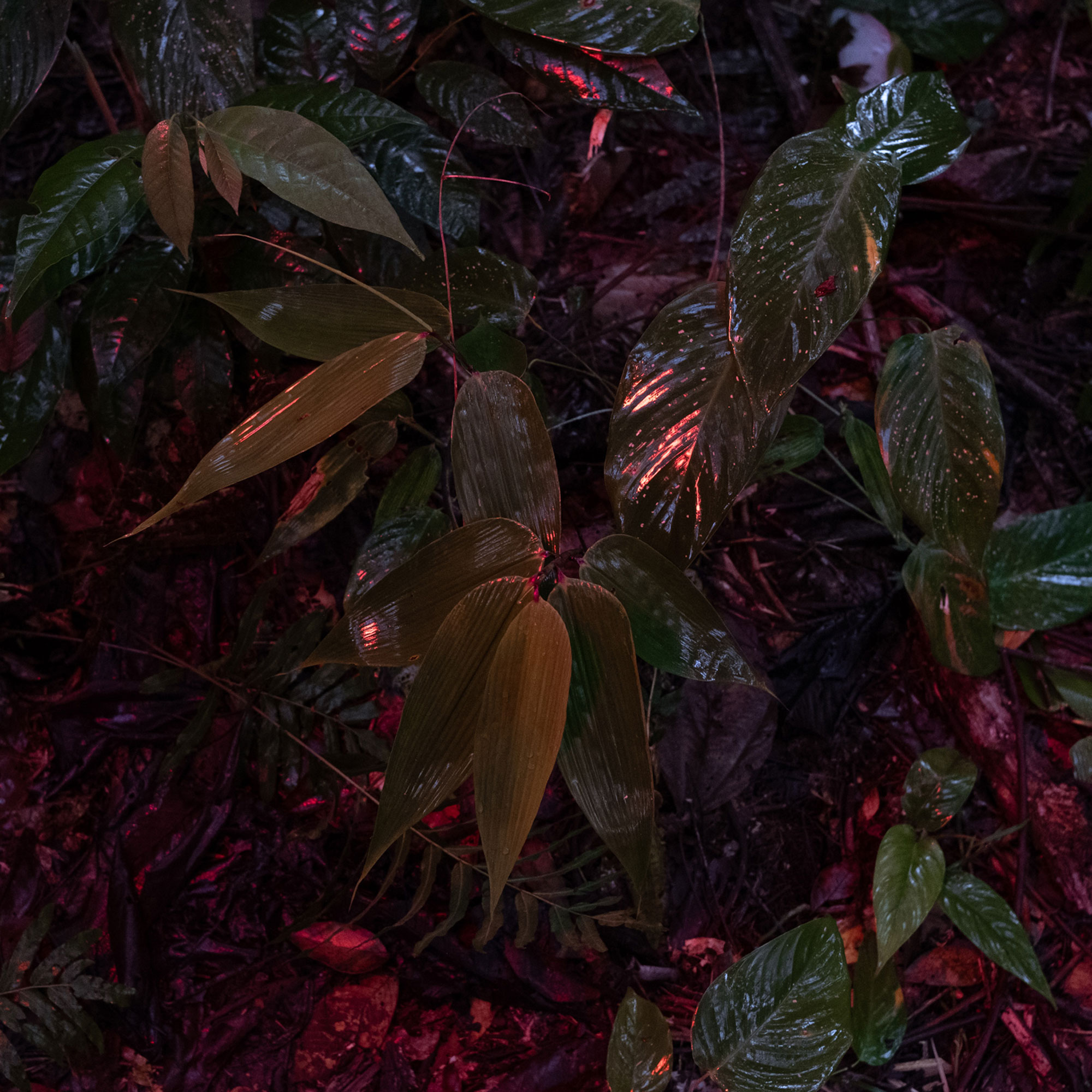 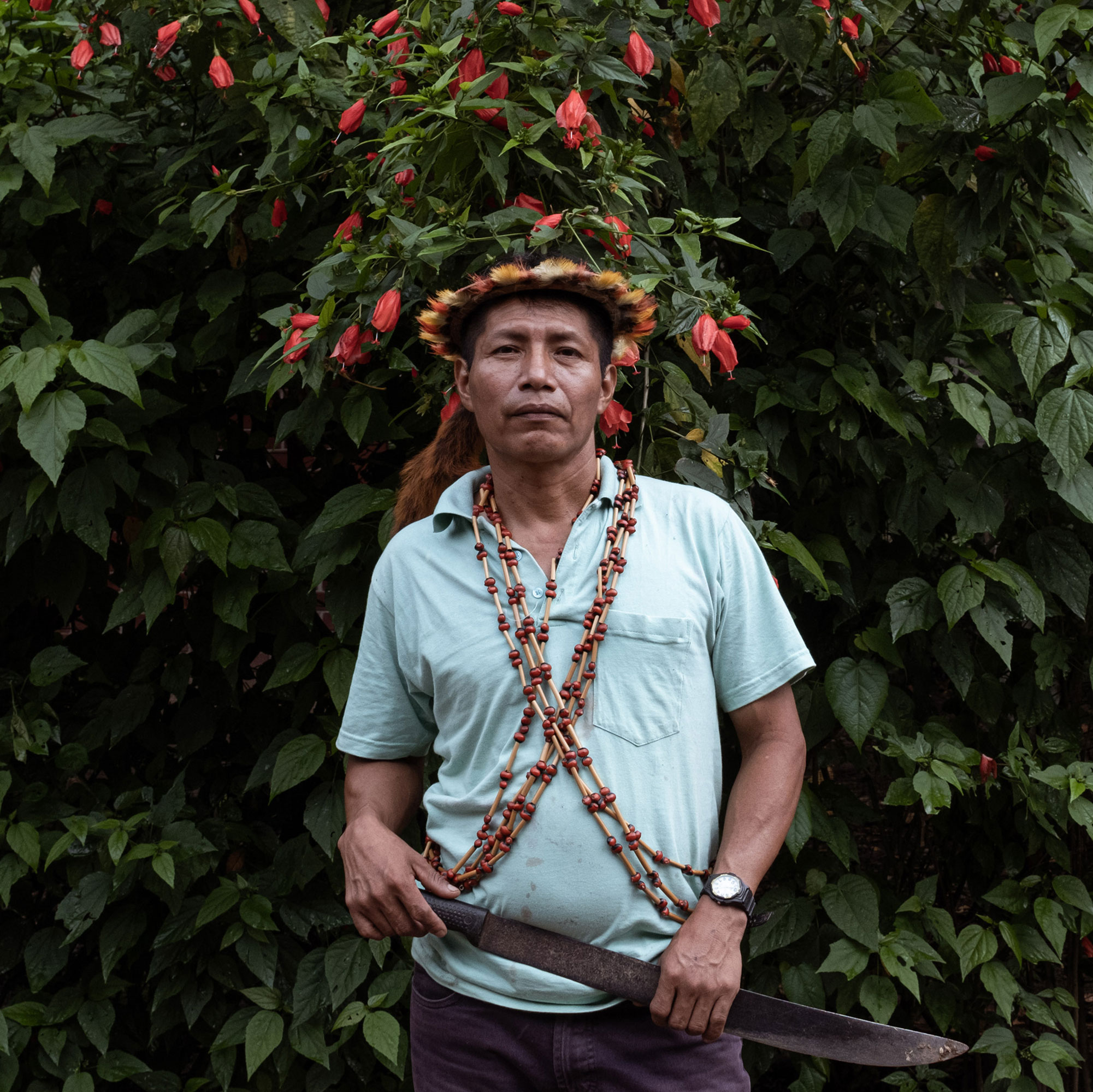 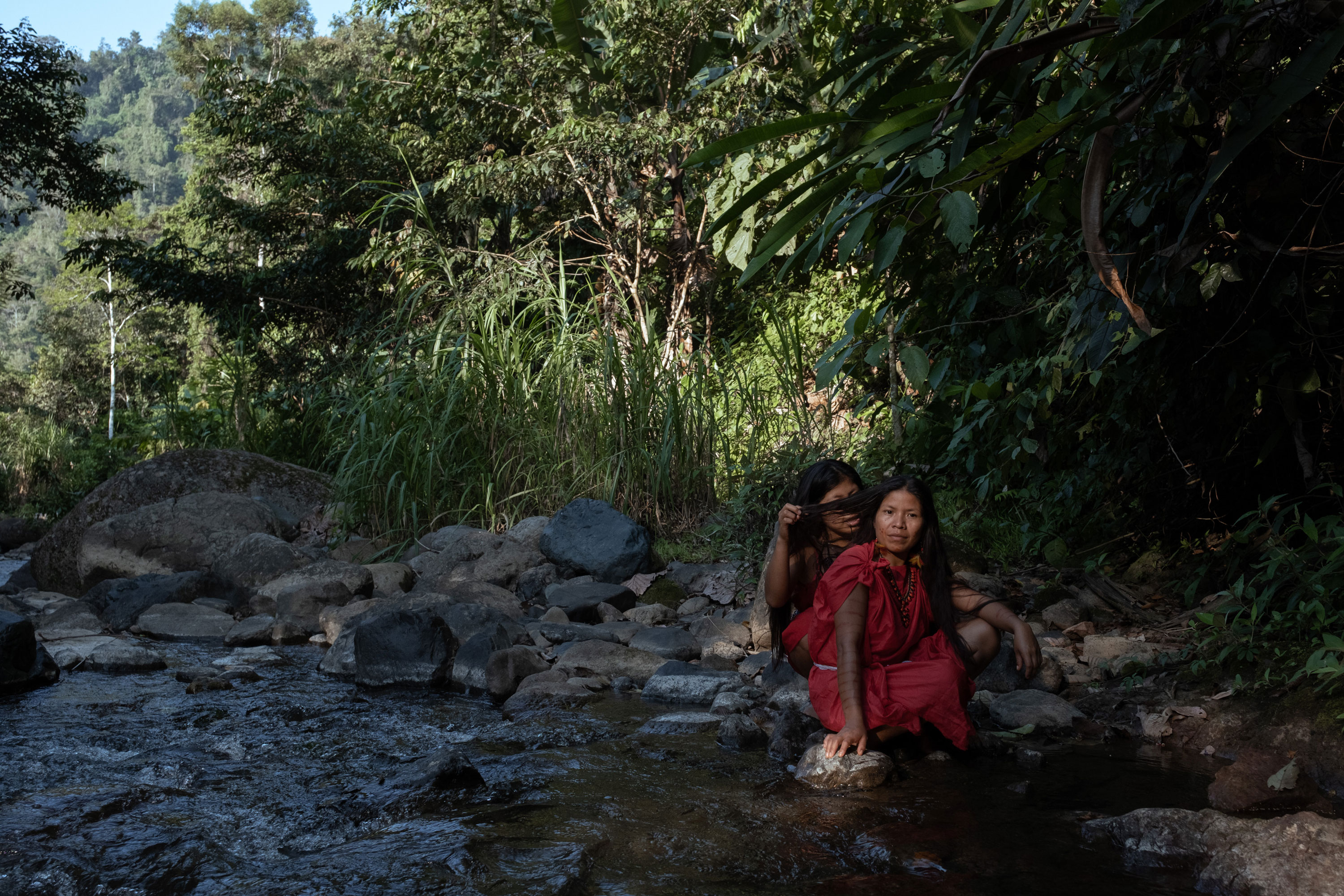 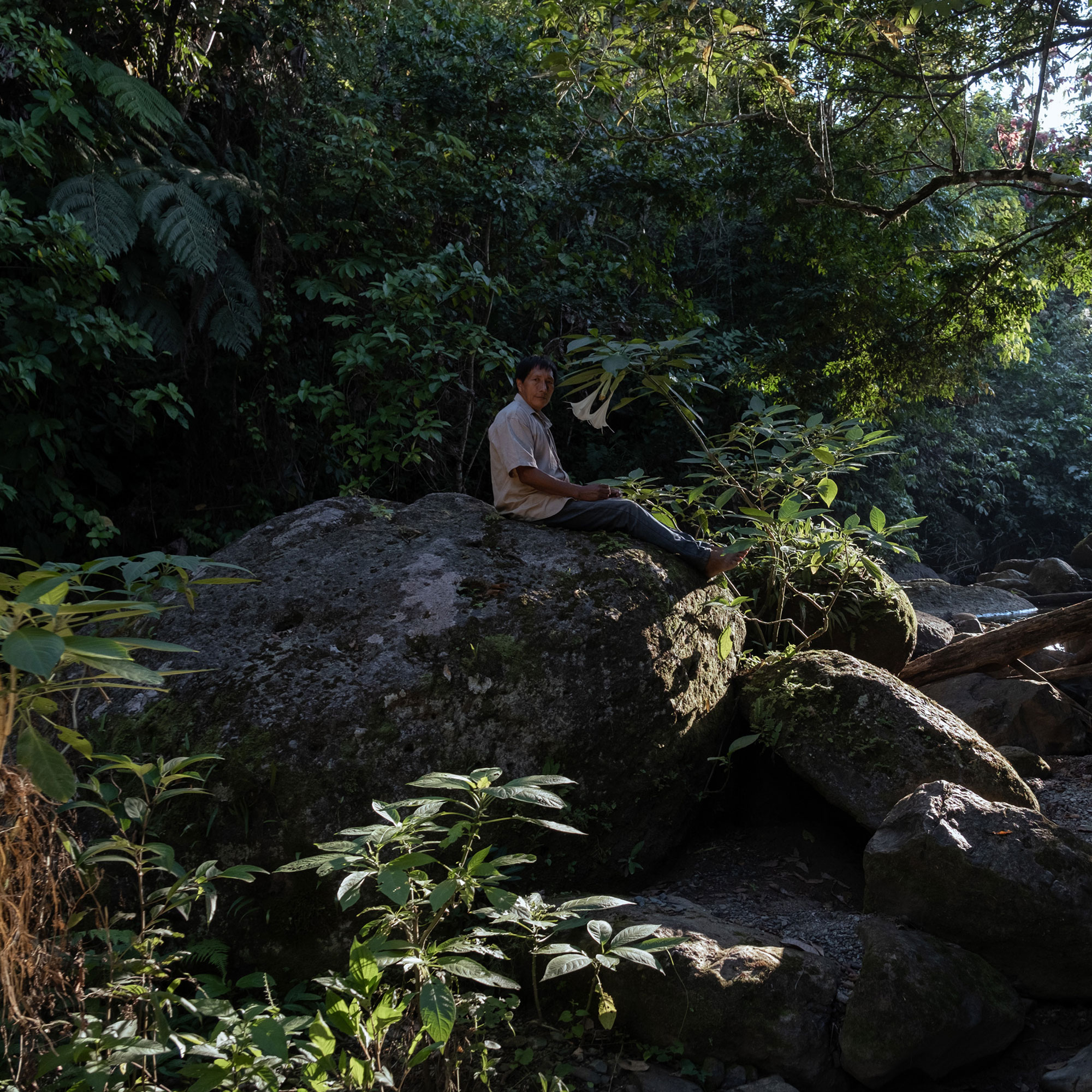 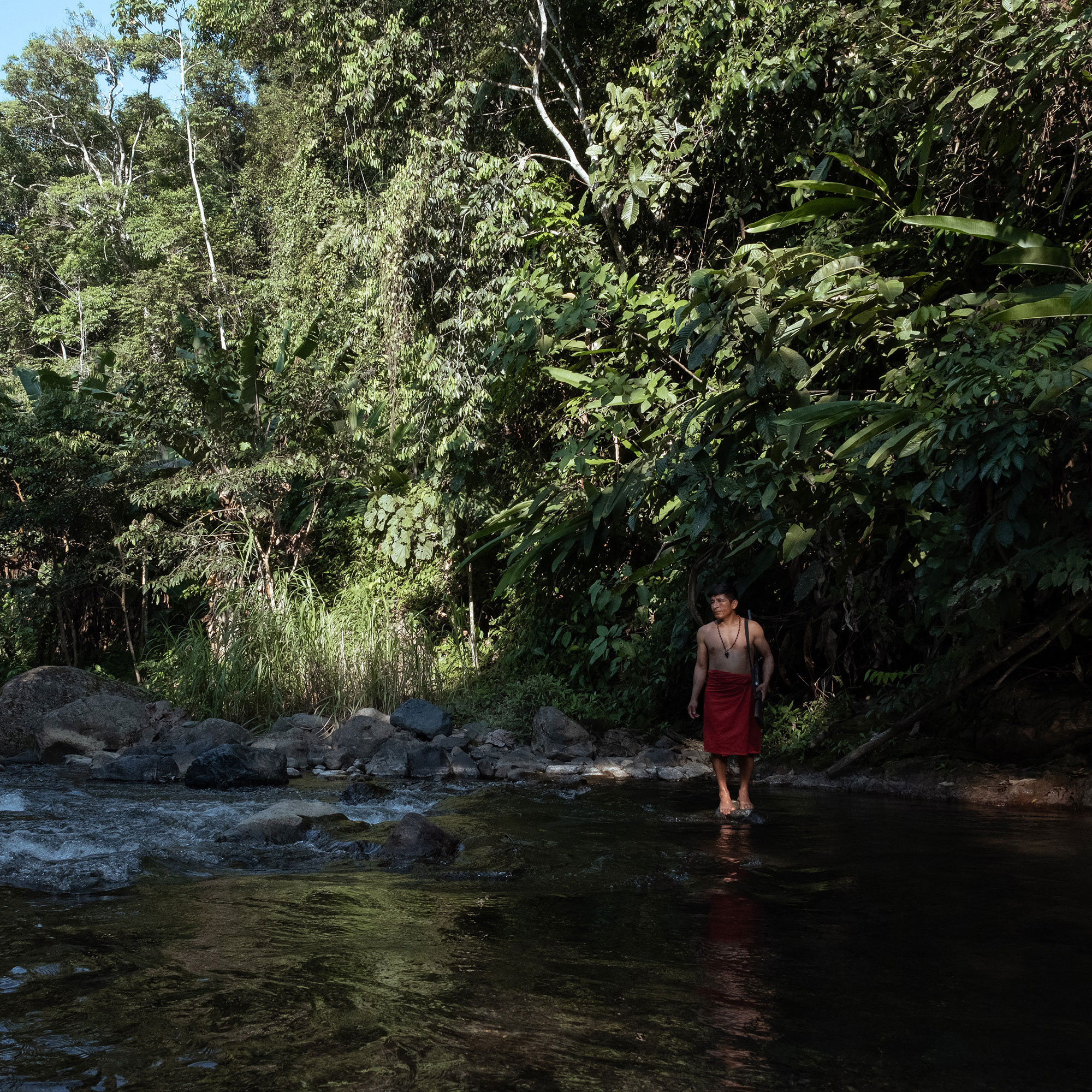 (6) The humid and lush vegetation of the Peruvian Amazon.   (7) Apu Aldo Kasen Awanash, head of the Awajun community at Tutumberos.   (8) Nelsi Cumbia and her daughter Nesila visit a nearby creek to bathe amongst the stones.   (9) Galvez Cumbia, hunter and farmer, can no longer make a living as a fisherman due to the contaminated waters of the Marañón River.   (10) Pio Akintui, hunter.

The Awajun are the second most populous Indigenous Community living in the Peruvian Amazon and among those that have suffered the most from the intensifying pressures on the environment. Over the past years, the eruption of “civilization”, as Aldo calls it, has disrupted the biodiversity that long defined their traditional foodways. Now, the Awajun have had to seek out alternative sources of sustenance to survive.

For a period of 18 months beginning in June 2019, the community paired up with the Network of Allies for Abandoned Societies (RASA JOVEN) and the International Indigenous Women’s Forum (FIMI) with the financial support of the the International Fund for Agricultural Development (IFAD), through it’s Indigenous Peoples Assistance Facility (IPAF) fund, to implement a new food safety project to help compensate for losses propitiated by the destruction of their native landscape. 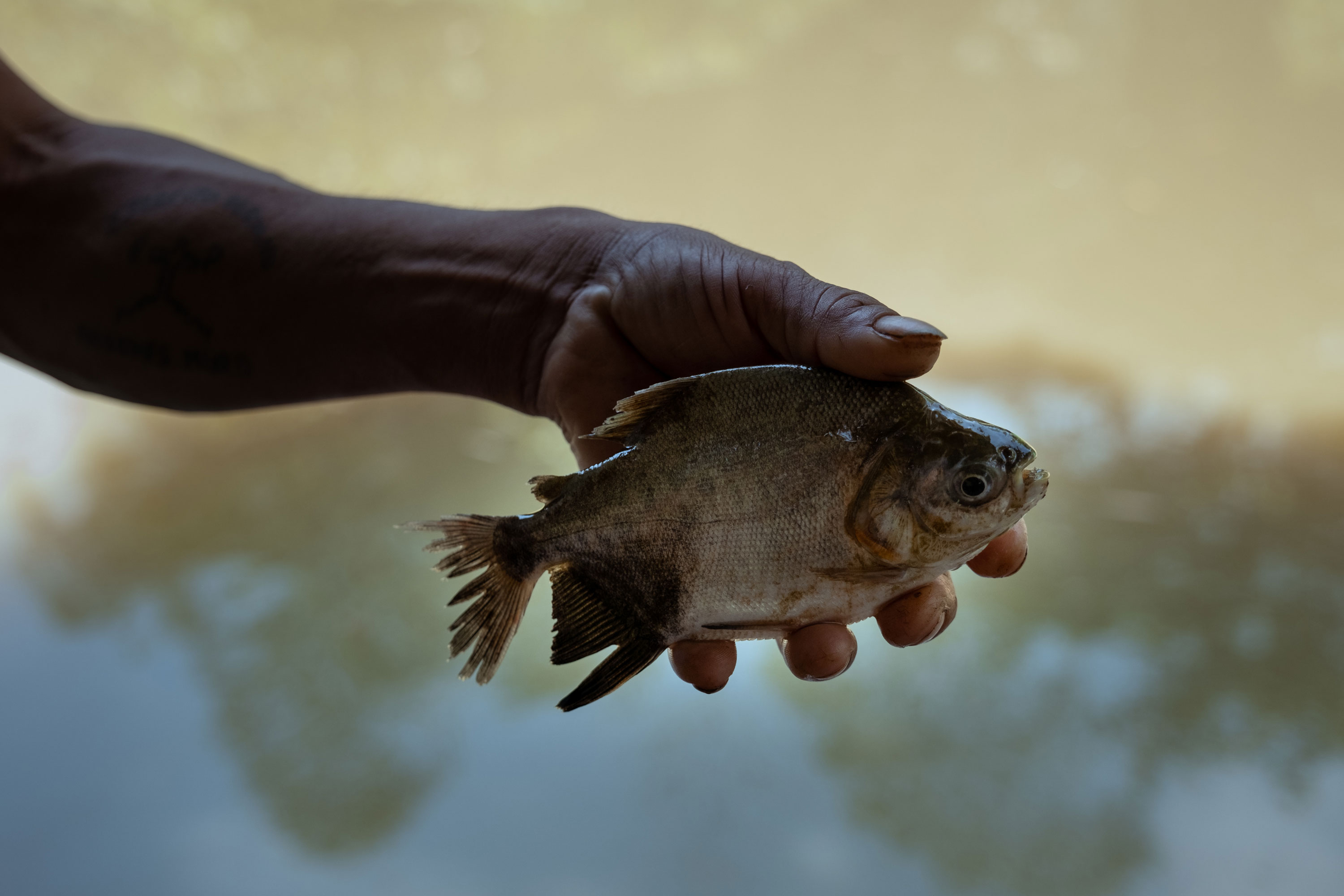 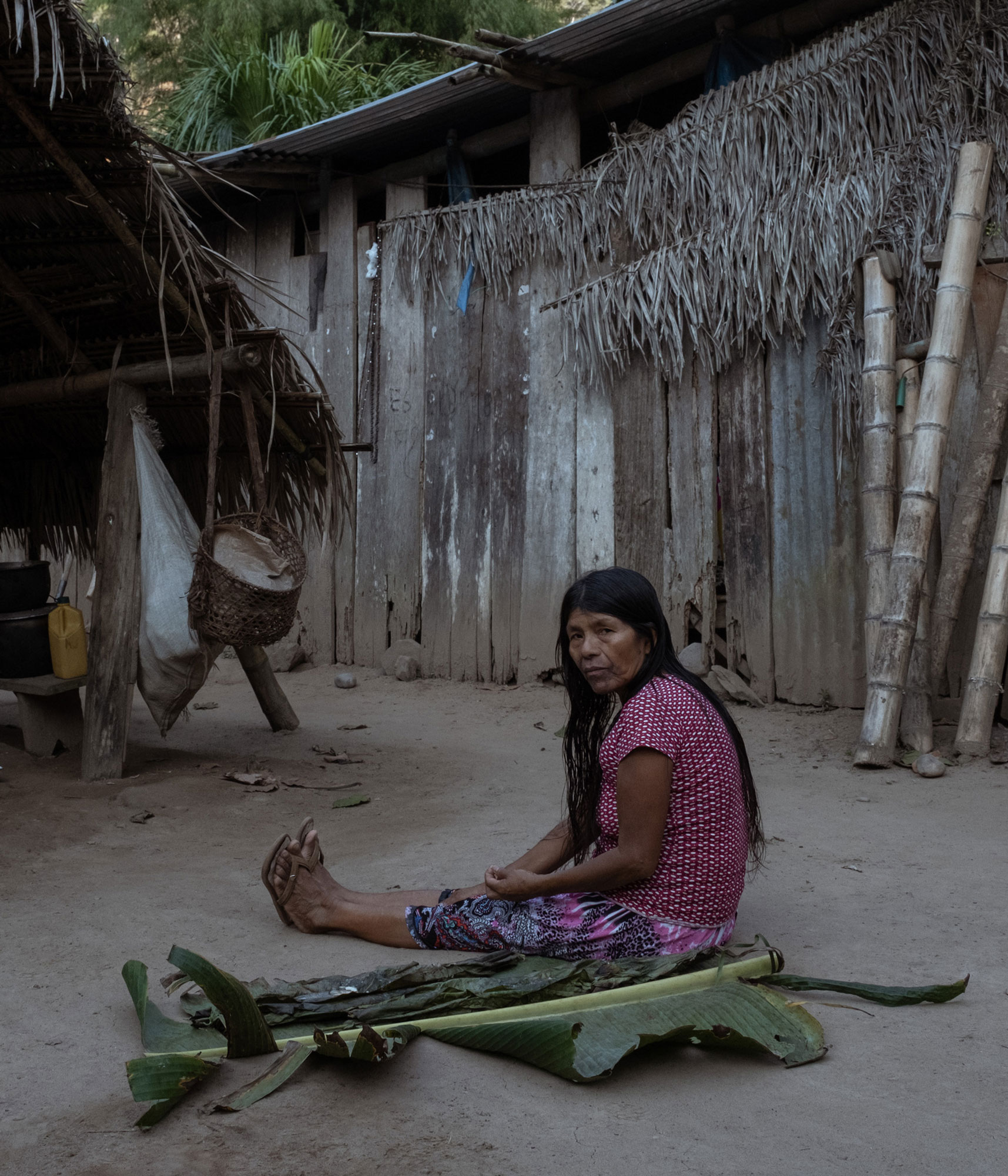 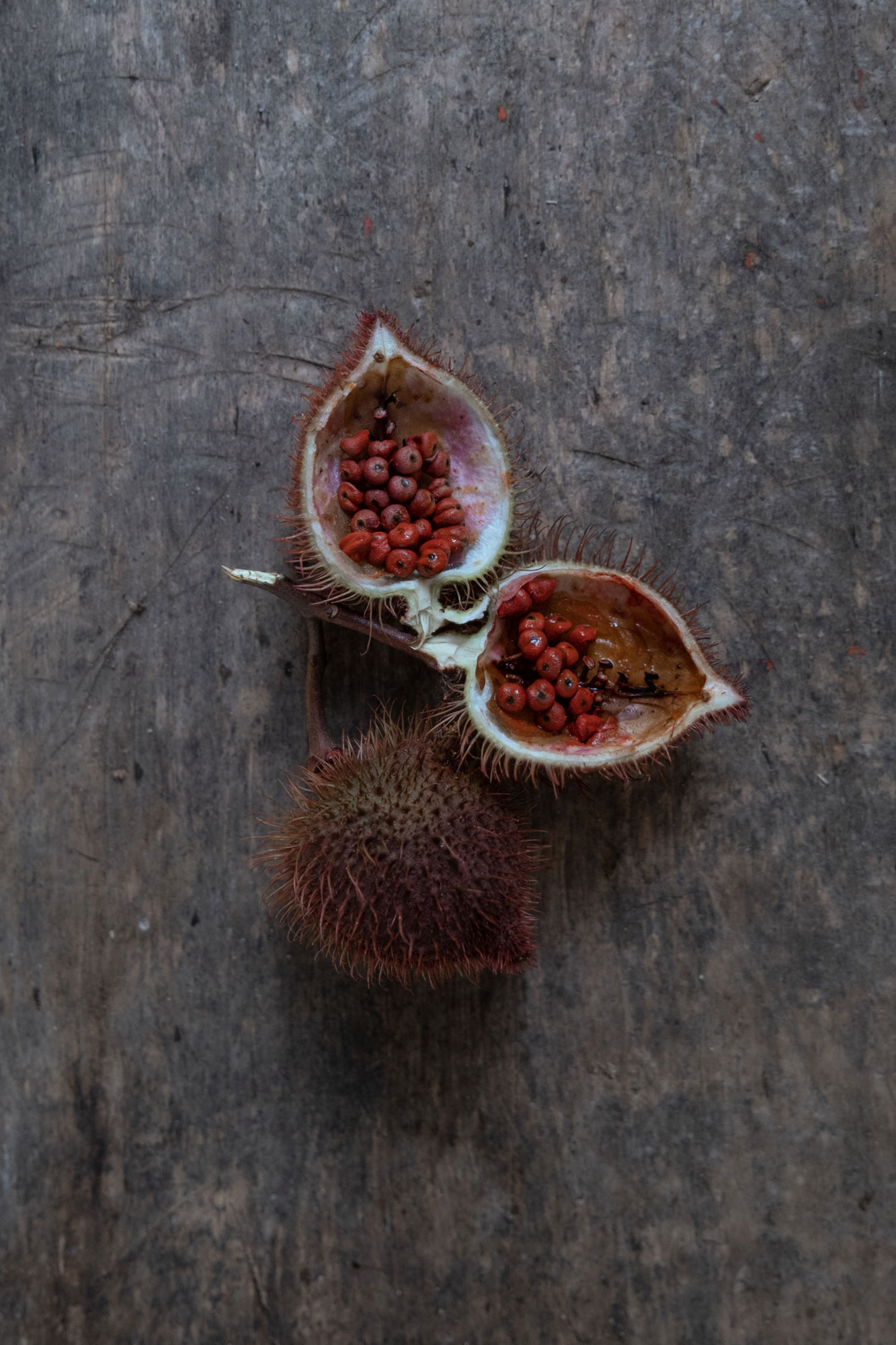 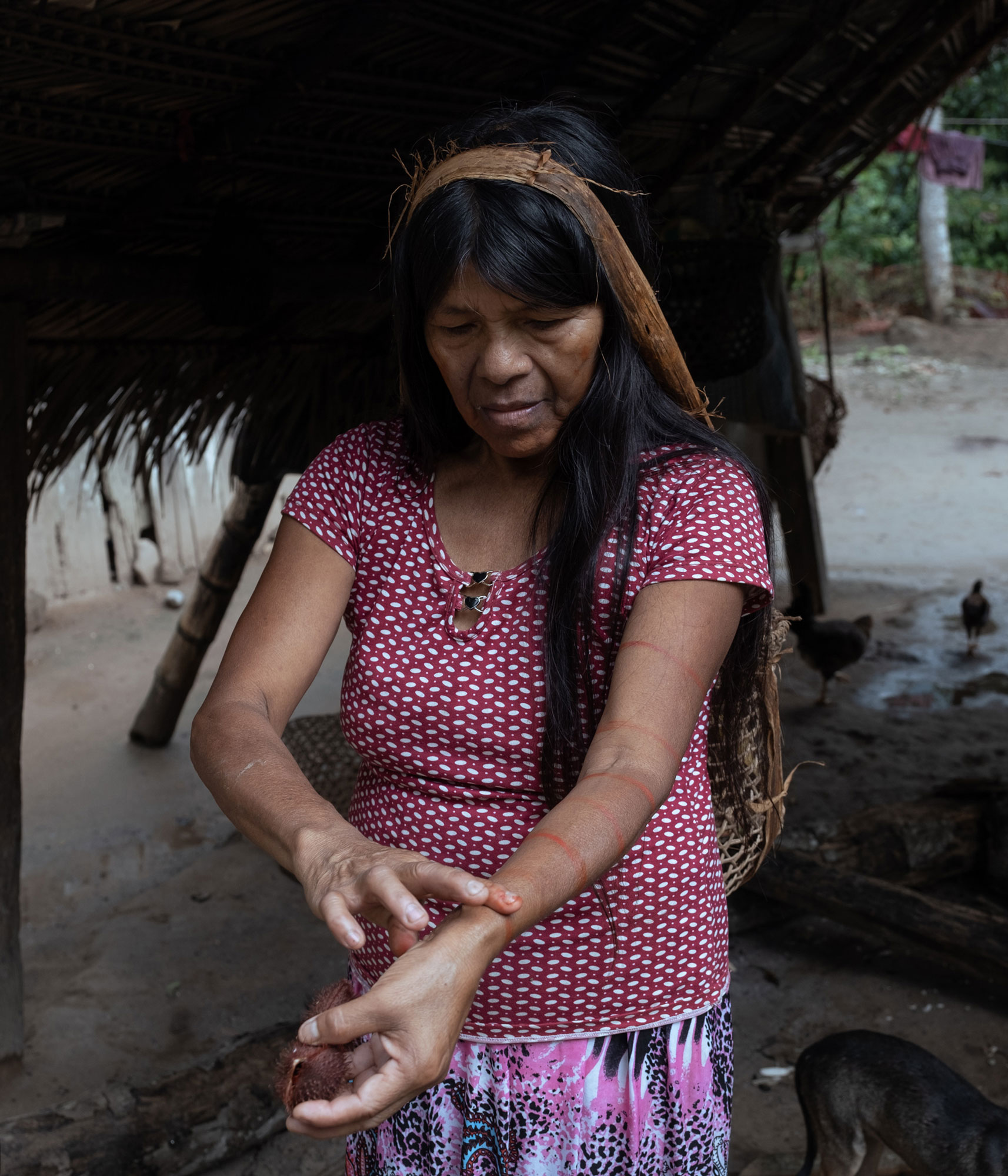 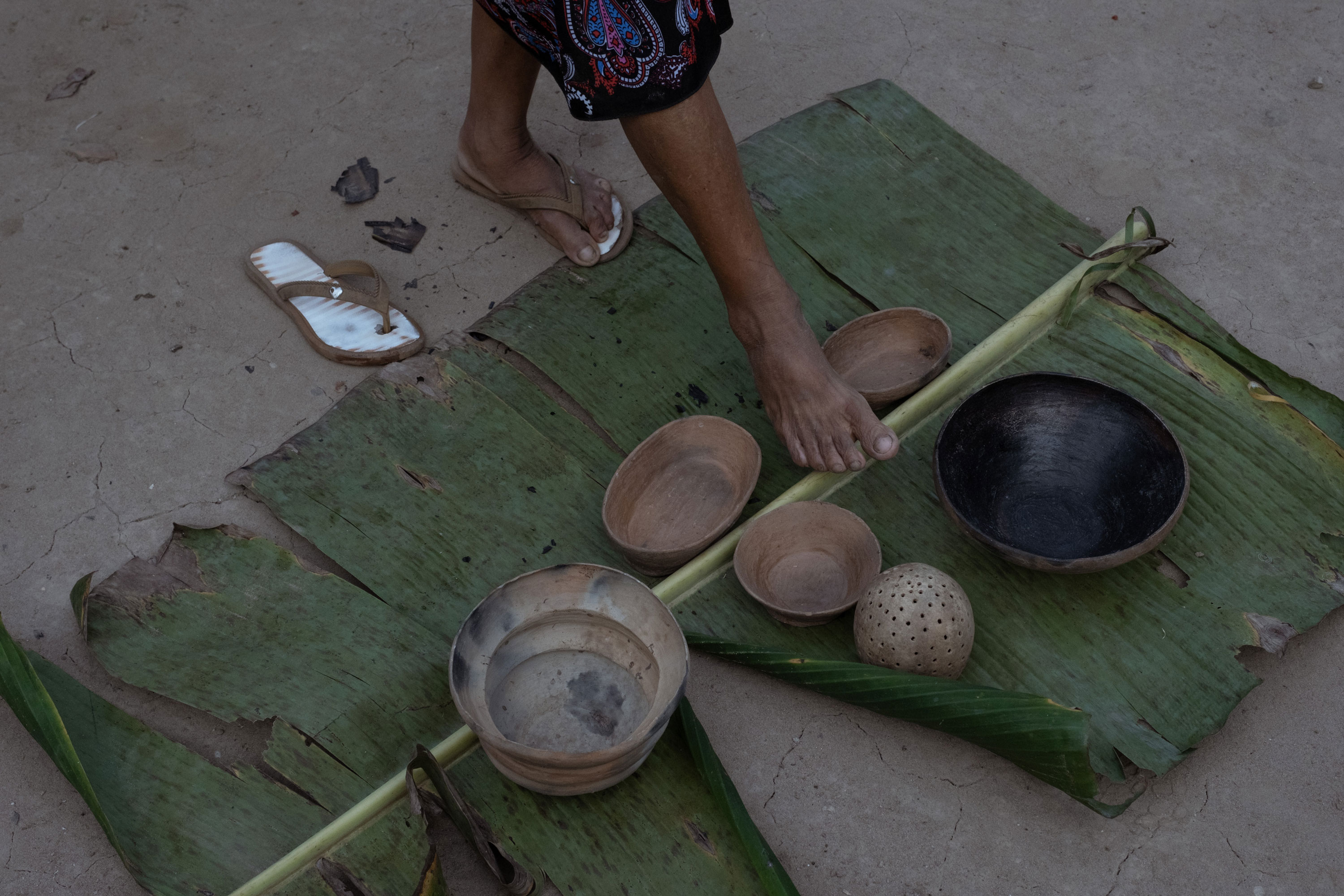 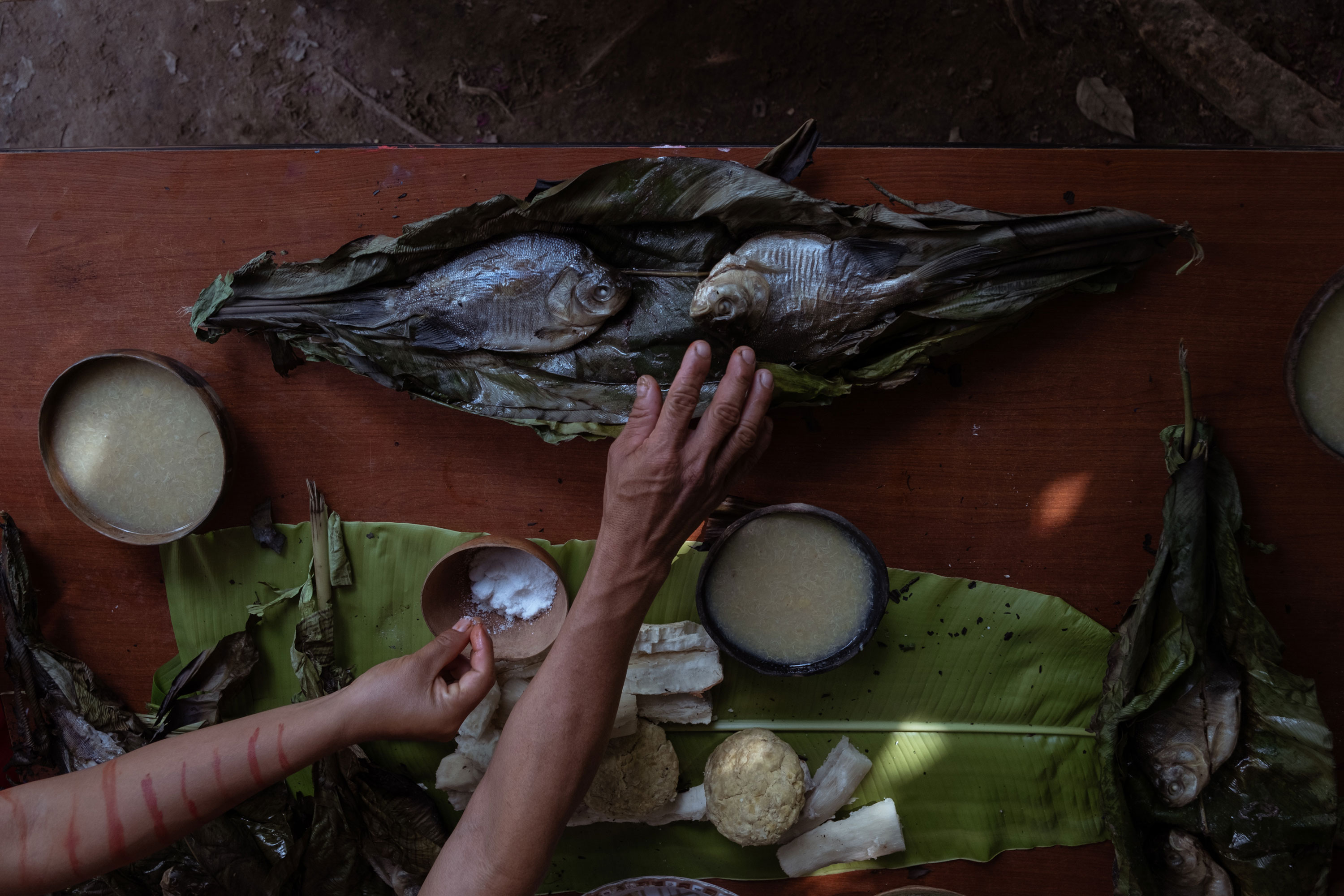 (11) Gamitana (colossoma macropomum) extracted from the fish farm built in Tutumberos. This native fish is of great importance to the diet of the Indigenous Peoples of the Amazon.   (12) Victoria Chamik sits next to a fish cooked on banana leaves.   (13) Achiote, a fruit used by most of the Indigenous Peoples of the Amazon. The Awajun use this pigment to paint their skin. The red color is seen as a source of strength.   (14) Victoria Chamik paints parallel red lines throughout her arms, as Awajun tradition indicates.   (15) Awajun pottery is considered one of the most beautiful and enigmatic in Peru.   (16) The Awajun communities maintain a diet based on fish, cassava and plantain.

The project’s accomplishments included the construction of a bio-orchard where community members harvest onion, beetroot, cucumber and cilantro to supplement their staple food, yuca. A fish farm, populated with 1000 fry brought in from the nearby city, Tarapoto, some 180 km away, has allowed them to recover an important source of protein previously lost to industrial pollution in the Marañón River. Combined with training workshops, these projects allowed the community to consolidate their harvest through improved maintenance.

“Our ancestors have lived here for eons, but they have never done away with the forest. Now, with modern civilization, it has changed completely. They have bought chainsaws to extract wood; they have eliminated fruits and scared the animals away.” 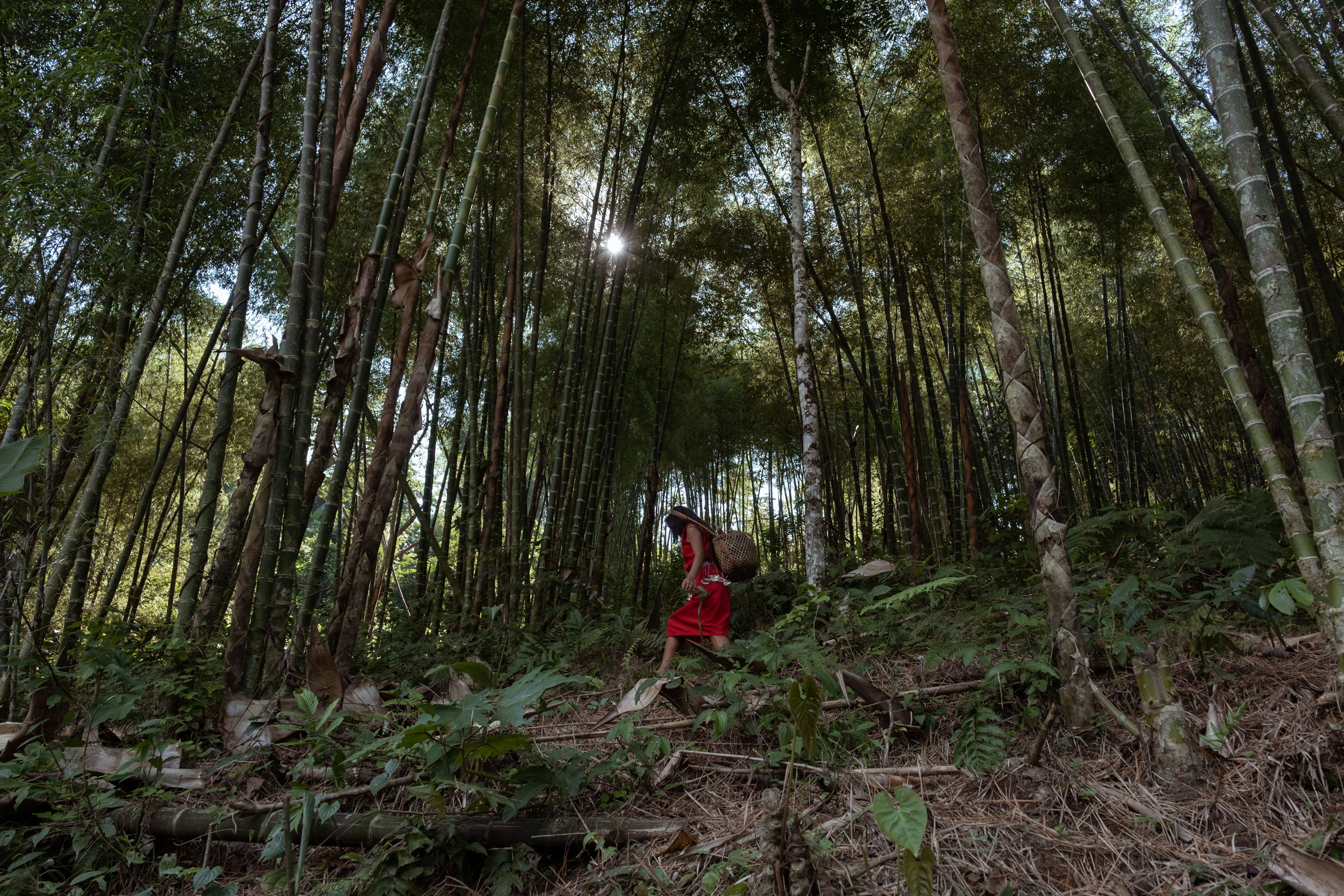 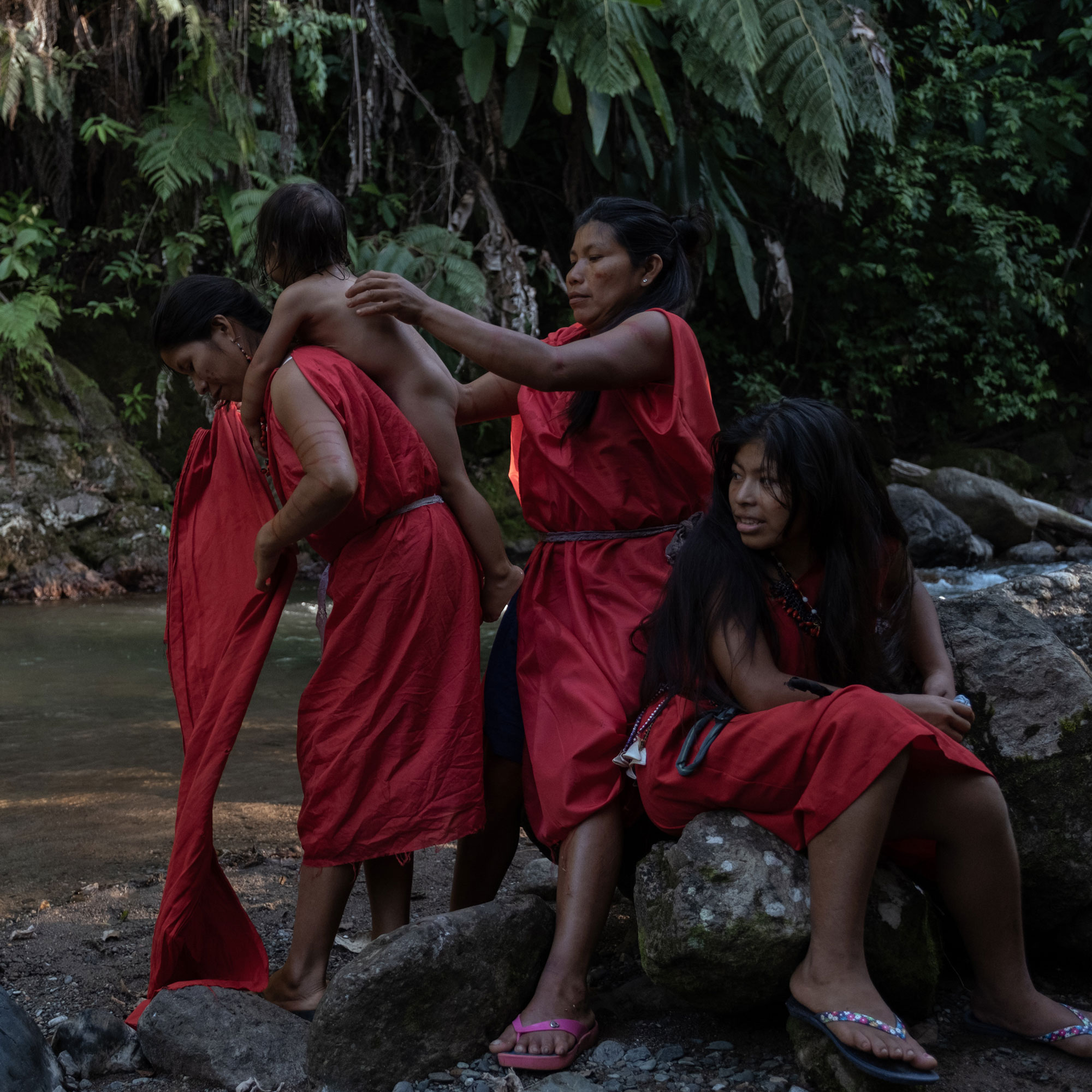 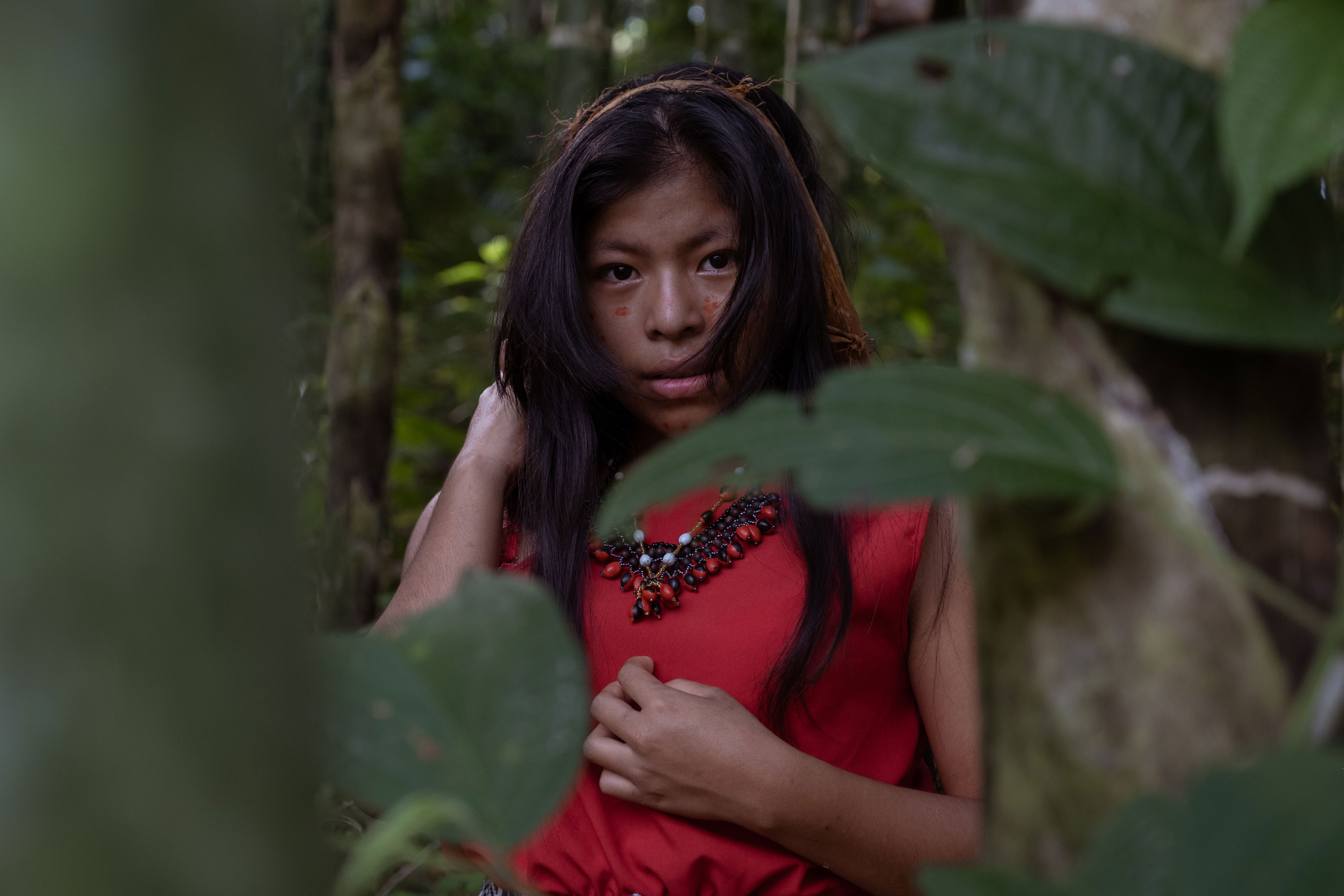 (17) Nesila Akintui traverses the bamboo forest carrying a basket of bananas. According to tradition, both women and men carry weight with their heads.   (18) Agat Paati carries her niece through the bamboo forest towards the creek, where they can bathe and collect water.   (19) The Awajun maintain a vital and ancestral bond with water despite contamination of the region’s rivers.   (20) Nesila Akintui.

Aldo recognizes that in order to keep the community alive, he and his people may have had to modify parts of their lifestyle—but he does not see change as entirely negative.  He and the Awajun of Tutumberos do not want to be completely isolated. Aldo wants young people, who can now study through high school without leaving home, to learn Spanish so that they can better represent their community’s needs to the outside world. Education, Aldo says, is the top priority.

Fundamental to any of these advances, however, is food security, without which the Awajun would have no choice but to emigrate. To defend their territory from future projects like the ones that have already caused so much harm, they must first be able to remain on their land, using it to reinforce their knowledge, ancestral as well as new, in order to adjust to the rapid changes imposed upon them. As the world loses more and more of its diversity to extractive industries, strong Awajun communities are not only essential allies in the defense of the Peruvian Amazon, but also in the defense of our future. 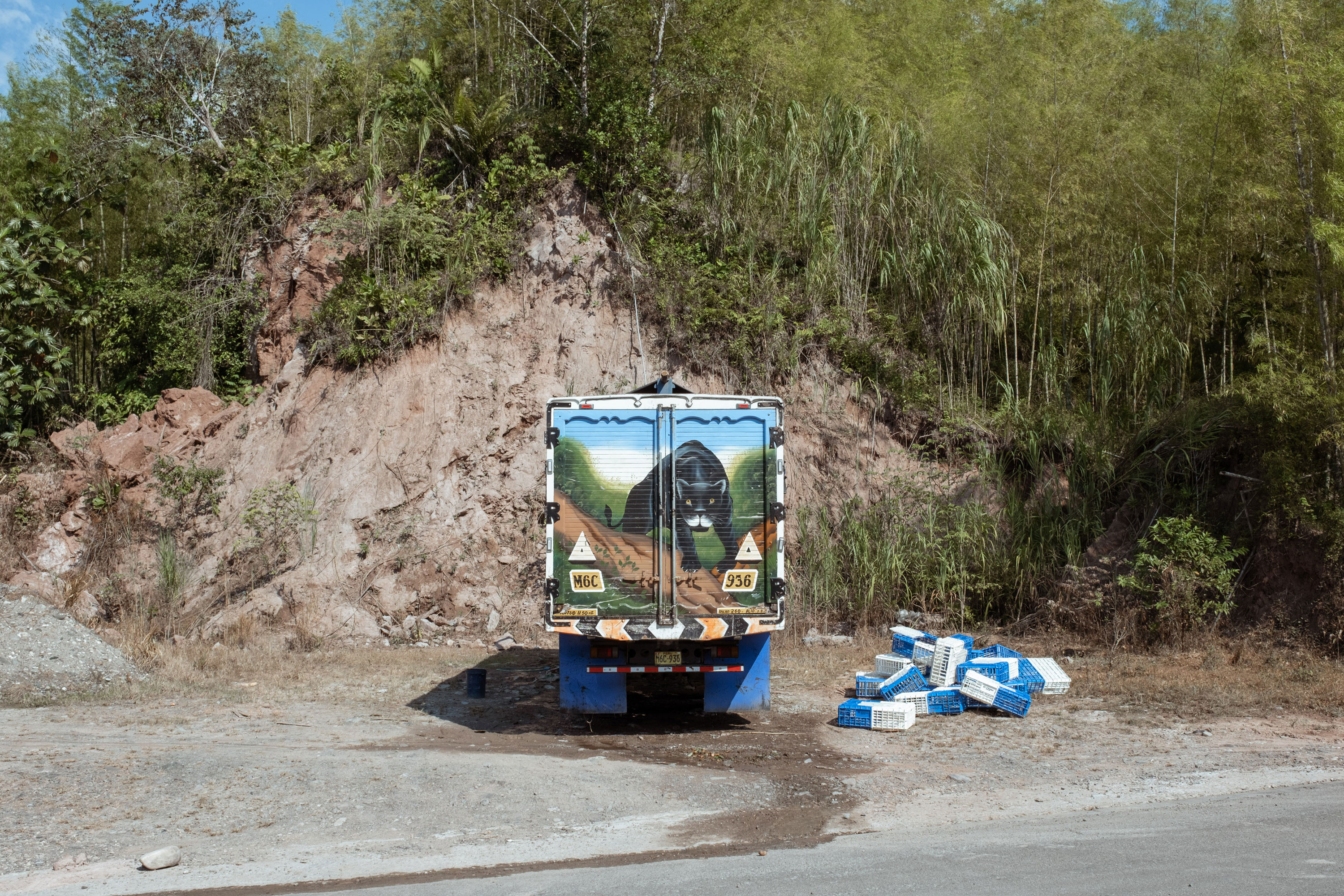 (21) The sale of bamboo is an important source of income in the region. Deforestation can seriously threaten and endanger native wildlife and the future of the Amazon rainforest.